Online sessions mandated everyone to be confined to indoor activities, from studies to play. Being a library faculty, this new life worried me. My Nissl’s granules are set at work to troubleshoot the problem of engaging my students in the library. I strongly wish to keep my students to continue learning reading, listening, speaking, and writing skills.

Out of the blue, I recalled the workshop I had attended with my students, conducted by British Council Library under the reading challenge program. The program was about reading strategies, reading with fun, and building the stories with new and different words. There was also one session called ‘Thinking out of the Box. They introduced word devices: pangram, lipogram, and anagram.

A pangram is a sentence or expression that uses all the letters of the alphabet. The words “pangram” and “gramma” are Greek words that mean “letter” and “every,” respectively. It’s a sentence made up of every letter in the alphabet.

The ability to view a complete picture of letters and their connections to one another for books was crucial in developing typesetting. Early printers utilized fictitious writings as early as the 16th century to show how notes would appear across a page.

It is believed that Henry Pattengill introduced “The Quick Brown Fox” Pangram to the world in 1885. The most familiar example is “the quick brown fox jumped over the lazy dog.” 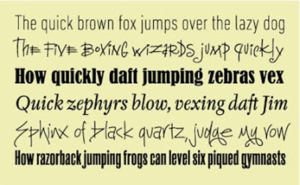 My students and I created sentences that included all the English alphabet letters. While doing this activity, they were worried about how to make a meaningful sentence. It was a fun and learning activity for all.

A lipogram is a word device where a specific letter or set of letters is purposefully left out. For instance, Ernest Wright authored the 50,000-word novel Gatsby in 1939 without using the letter “e.” The letter used the most frequently in the alphabet is “E.” T is the second most frequent letter, followed in order by A, I, N, O, and S. The alphabet’s Q is the least utilized letter.

“Mart Had a Little Lamb” is such a well-known and beloved poem that it is a popular target for lipograms.

Everyone knows the original nursery rhyme.

Mary had a little lamb

Ifs fleece was white as snow,

And everywhere that Mary went

The lamb was sure to go.”

The letter “O” is the only one left out of this lipogram of the nursery rhyme. The letter “O” appears only three times in the poem; however, it requires much rewriting.

“Mary had a little lamb

The bleached and chalky kind

And everywhere she went, the lamb

Was rarely left behind.”

While understanding this term, students were very excited to create new rhymes in their own way and omit letters. You, too, can conduct this as a group activity to develop students’ critical thinking, communication and writing skills with this.

An anagram is a word play in which the letters of the original word are rearranged to form a new word or phrase. Examples of anagrams can be entertaining and clever and frequently produce absurd results. Anagrams are commonly encountered in daily life. Crossword puzzles and games like Scrabble both feature them. Children and adults can enjoy making anagrams by rearranging the letters in words and phrases to create new and fascinating words and phrases.

A more creative way to use anagrams is to make them relevant to the original word or phrase. One of the good examples is “Debit Card = Bad Credit”. Some more funny examples are as follows.

Through the ages, anagrams have been widely used. They date back to both the Biblical and ancient Greek eras. For instance, Plato and his adherents believed that anagrams might reveal the underlying meanings of words. Before disclosing their discoveries, medieval scientists like Galileo coded them in anagrams. Both traditional and contemporary literature contains anagrams. Many authors change the order of names’ letters to give their characters fresh, original names. Some examples are

Anagram helps students to make new different words as well as their vocabulary and language. This activity is playing with words with learning. Students loved this activity a lot.

All in all, the online sessions I conducted were worth it for the students to feed their brains during the lockdown, unlocking their love for library activities. Students showed their enthusiasm with full gusto and kept themselves active throughout.